Canadian diver Pamela Ware said she’s not going anywhere after a startling error during the 3-meter springboard semifinal at the Tokyo Olympics on Saturday.

Ware leaped off the board and splashed into the pool feet first. The missed dive resulted in no points and she ended in 18th position with a score of 245.10. The top 12 divers went into the medal round. 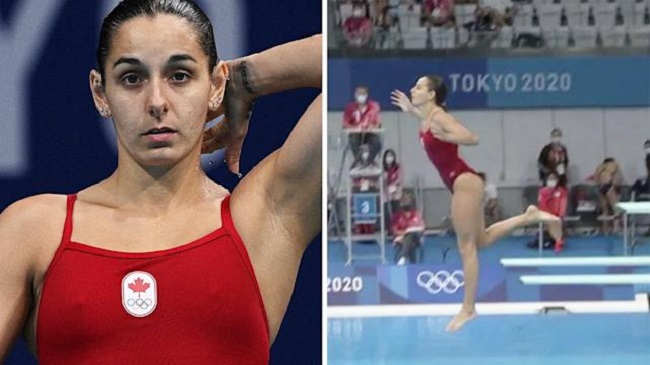 Ware informed her followers she was “proud” of herself at the end that the mistake happened to her at the “wrong time.”

I Feel Quite Proud of Myself

Something incredibly difficult. What you see in the competition is just a little part of what we truly accomplish to get to where we are. I was so ready for this competition and I made a mistake.

The incident “could have happened to anybody, but it happened to me at the wrong time,” Ware said in an Instagram video posted on Sunday. “But I am proud because I have done all necessary to get it to where I am. And I’m human. It’s okay if I mess up sometimes.

She claimed this experience will not permanently alter her professional trajectory.

Since I won’t be leaving anytime soon, I hope you all can find a way to tolerate my presence. I refuse to give up. I refuse to let this competition define me or discourage me. She continued, “And I plan to be here for another three years.”

Immediately preceding his Olympic debut, Ware won a gold medal in the 2019 Pan American Games in Lima, Peru. On the 3-meter synchronised springboard, she placed first.

She competed at the 2015 Pan American Games in Toronto and the 2015 World Championships in Kazan, Russia, and came away with two silver medals in each competition.